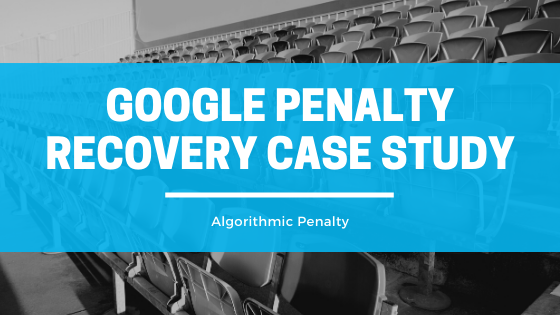 This is a quick algorithmic penalty recovery success story of a digital brand that makes its revenue from its website.

Our client uses several monetization techniques to earn online.  Those include selling monthly subscriptions, monetizing with ads, and affiliate earnings from their blog. It is a big site combo, involving tens of thousands of backlinks that could be a source of havoc if their integrity and quality are not well-maintained.

To achieve their revenue, traffic, and authority growth, they implemented search engine optimization, ran ads, social media marketing, and inbound marketing techniques. It is not easy being a digital brand with so many bases to cover these days.

And then the worst that could happen, did just that.

Our client noticed a massive drop in SERPs rankings almost overnight. They could not understand why that was happening since they had invested a considerable amount of money in a digital marketing firm to spearhead their digital outreach campaigns.

The goal was to implement inbound traffic methods that would help them bring down marketing costs while boosting their organic traffic and cultivating genuine relationships with their subscribers, both existing and future ones.

Before approaching us for the algorithmic penalty recovery service, the client had discovered us from an online search when they were looking for a reliable and affordable digital marketing service.

But told us of how they got distracted and caught wind of another “affordable” digital marketing company. The other company had promised fast results in exchange for an “affordable” fee.

The client, being an SME and understandably happy to save on digital marketing costs, had taken the offer up and ran with it.

Just over two months ago, the client reached out to us frustrated. They were a victim of a digital marketing company that promised great results. After four months of aggressive link building, social media, and on-site SEO campaigns, what the client had got was a website and blog that were leaking traffic profusely.

The site had slumped from the top page of Google results to the second, then third, and fourth. It was buried. Their two main competitors had replaced them at the top of SERPs.

Since starting the online business 4 years back, they had never experienced anything like this. Considering they were just switching gears to increase their growth and revenue, it could not have come at a worse time.

While the site combo’s earnings weren’t immediately affected—largely because of their core monthly subscription fee model—the client knew it was a matter of time before a huge slump in revenue revealed itself.

It was a disaster waiting to happen.

The biggest challenge for both of us was to determine what type of Google Penalty hit the client before we could even think of getting the penalty lifted.

With several marketing channels, streams of income, and a load of backlinks to consider, we had to approach the problem from every possible angle to know what we were dealing with.

The client’s case wasn’t unique, though.

We have had clients come to us after a massive drop in ranking just when they had started to see results from a major outreach campaign. Our SEOs would almost immediately recognize the problem after conducting an SEO audit—based on a thorough checklist we work with internally.

Mostly the problem would be spammy backlinks.

But this case was unique. It couldn’t be spammy backlinks alone.

The client wasn’t using spammy forum backlinks, a massive number of backlinks from a single or just a handful of sources, or having problematic redirects like many cases we’d seen before.

Also, we often see an algorithm issue confused for a penalty—a major Google update trigger (Penguin or Panda) versus a manual action hit.

The first step we took was to know precisely whether the issue was to do with an algorithmic update or a manual action penalty.

Our team checked the website’s Google Search Console inbox to see if there was a manual action report by Google. Google usually sends one in case of a manual action penalty.

If we’d received one, our team would have made the recommended changes. We would have also explained the origins of the problem and explain our client’s resolution to Google in a masterfully written Reconsideration Request.

An algorithmic penalty involves the sanctioning of a blog or website by one of several Google algorithm updates. No manual action is taken by one of Google’s army of human reviewers, as in manual action penalties.

For that reason, the human reviewer can’t reverse a negative algorithm update effect on your site. No Reconsideration Request necessary, either.

We started by listening to and recording what the client had to say; describing the problem when it started, and deeper questions. Our team also deployed a set of tools available to us to collect cold, hard data so we could thoroughly analyze it.

The tools we started with include:

We use some of the tools to get thorough data on backlinks, domain authorities, trust, and citation flow.

Our team then got to action.

There were spammy, low-value links we knew could be problematic. The client informed us they had had an automated backlink audit before. We decided to conduct a more thorough manual backlink review ourselves this time.

At Sondora, we are not big fans of the disavow action. But in the case of a penalty, deploying the action is usually inevitable. We reach out to the errant domain owners via email or another effective means to inform them of the issue and ask that they remove the problematic links from their sites.

We follow up with unresponsive webmasters before informing them the potentially errant links would be added to a disavow file. If no response is forthcoming, we go ahead and upload the file on Google Search Console.

We disavowed an entire domain using the “domain:” function if a whole domain was spammy—rather than just a single URL.

We then used our internal tool and verification process to scan and upload a new list of disavowed backlinks on Google Search Console.

The team then proceeded to conduct an in-depth technical SEO analysis.

A major discovery was the issue had the signs of an algorithm update “penalty”.

The next step involved deploying both standard and specialist technical SEO steps. Here are a handful of important ones involved:

Our internal algorithm penalty recovery service uses a bunch more techniques, especially for a large site such as the subject of this case study but these are some of the most popular we deploy.

As a client, you don’t have to lift a finger or even have to learn what all these involve. That’s why you hired us.

Once we established the most probable cause of the site performance slump, we prepared a detailed plan to help our client recover their traffic, visibility, and competitive advantage.  We kept our client in the loop every big step of the way, so they knew progress all along.

Within 10 weeks since starting the campaign, the client’s traffic had revamped to pre-penalty numbers.

We had also advised and helped the client to:

We are also helping the client to create high-quality content based on a combination of what their target readers want to read (from our broad research team) and new, relevant information they can offer to not only retain the loyalty of existing subscribers and new ones but also establish their subject matter authority to stay ahead of the two major competitors.

Our client was and still is ecstatic about recovering from the Google penalty that was a major threat to the lifeline of their online business model.

Are you experiencing the same problem—a frustrating Google Penalty or a sudden slump in website performance and don’t what could be the problem? Then contact the Sondora’s Google Penalty Recovery service team to get back your traffic, ranking, and revenue before it even spells trouble for your business.